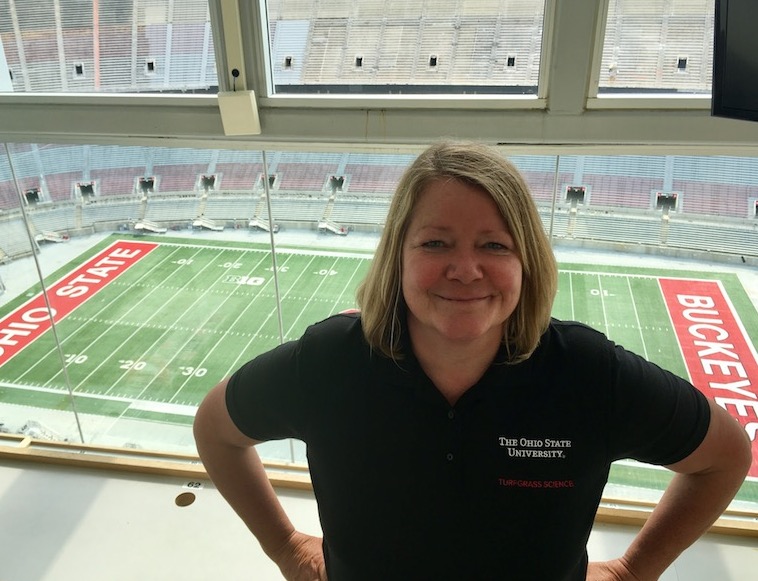 I have received some questions about tetraploid perennial ryegrasses recently, so I thought it might be helpful to share some information about them.

This is great news for those of you managing sports fields that host games early in the spring or into the fall and winter periods. Keep in mind that the seed is slightly larger than the finer-textured perennial ryegrasses, so apply higher rates accordingly. Once germinated, they can also establish quickly, which offers another advantage since grasses that establish quickly are far better at suppressing weeds such as crabgrass and prostrate knotweed.

Rapidly germinating and establishing turfgrass species are an important tool in an organic turfgrass management program where herbicides might not be permitted. Other reported advantages of tetraploid ryegrasses include excellent root growth, good color, winter hardiness and some tolerance to salinity and drought. It is slightly coarser in leaf texture and less dense than diploid perennial ryegrass, but it mixes well with other cool-season grass species. In a mixed sward it does not tend to dominate. If your goal is to maintain a predominantly Kentucky bluegrass sward but you rely upon a perennial ryegrass overseeding program, the tetraploids might be a good fit.

Sports field managers in the transition zone have also reported a quicker transition in the spring if bermudagrass fields have been overseeded with tetraploid ryegrass, since it is less dense than diploid ryegrass. In addition to the aforementioned benefits, research at the University of Arkansas has shown that the quality and percent ground cover of tetraploid ryegrasses under traffic stress is comparable to the diploid perennial ryegrasses (as in pretty good).

Since perennial ryegrass is susceptible to several turfgrass diseases – some of them quite devastating – it’s important to look at cultivar disease data from NTEP or the annual Rutgers Turfgrass Proceedings report when choosing cultivars. In relation to gray leaf spot resistance, the tetraploid ryegrasses don’t rank at the top, though there’s research being done to improve this. The consensus right now is that tetraploid ryegrasses are susceptible to gray leaf spot, and will probably get it if there’s an outbreak. However, observations have been made at research stations that suggest that tetraploid ryegrasses may have the ability to recover from a gray leaf spot infection. At one research study in Kentucky, Dr. Leah Brillman was able to report that tetraploid ryegrasses damaged by gray leaf spot were able to recover. That is promising news. It’s also important to note that perennial ryegrasses should not be established as a single cultivar monostand, but should be established or overseeded as a blend of several cultivars that exhibit as much resistance as possible to a range of abiotic and biotic stresses. Disease resistance in particular can be enhanced by genetic diversity, mixing multiple cultivars of grass within a species.

In summary, there are a lot of reasons to try a tetraploid cultivar in your seeding program. Work with your local seed supplier or local turfgrass extension specialist to choose the best cultivars for your location and your field’s needs.