Dreams Do Come True: How the Field of Dreams Became Reality

Millions of people tuned in August 12 to watch a regular-season Major League Baseball game between the New York Yankees and the Chicago White Sox. And although the game ended in Hollywood fashion with a walk-off home run, the night was not about the two teams that took the field. For this night was about the baseball field on which the game was played. That’s because the field was situated in a cornfield in Dyersville, Iowa…and it was the stuff of dreams.

In the iconic 1989 film “Field of Dreams,” Iowa farmer Ray Kinsella, played by Kevin Costner, has a vision of building a baseball diamond in his cornfield. Thanks to years of planning and hard work, Major League Baseball and its partners came together to make that vision a reality. Leading that effort was BrightView Sports Turf, which built and managed the field.

“Everything just came together there at the end,” said Murray Cook, president of BrightView Sports Turf. “We started this project two years ago, in August 2019. Obviously, we had to sit it out in 2020 because of COVID, but we still had hope the game would be played in 2021. I’m just really proud of the staff we had on board. Our design team of Populous and BaAM Productions, our project manager, and our BrightView team worked together in such a great way with the Commissioner’s office to bring their vision to reality. When I say it was a team effort, I really mean that.”

According to Cook, when game day rolled around, the best part for him was witnessing the reactions of everyone who was seeing the field in person for the first time – from the fans coming through the gates to the players stepping onto the field to representatives from Major League Baseball and the Commissioner’s office taking their first tour of the field.

“I’ve been doing these types of events for a while, and I really enjoy being able to share the experiences with so many people,” said Cook. “When we were sent to inspect the site in 2015, we first looked at the original movie field. It just wasn’t going to work, because the field grades were off and there was not enough room to build all the temporary structures around that location. So we found a new site (in the corn) about 1,000 feet to the west of the movie field to build the MLB field. When you look at all that went into the planning over the past several years to build the ballpark and the field for this game, it’s something pretty incredible. I was always reminding new members of our team to live in the moment, because this game is going to be special for a lot of people.”

Getting to game day was not without its challenges. The Field of Dreams game was originally scheduled for August 2020; but, like most things in 2020, it was impacted by the COVID-19 pandemic and was delayed until this year.

According to Cook, however, the extra year actually had some benefits. “From an agronomic standpoint, it gave the field another year to grow,” said Cook. “Last year, we had sod down by the end of May, so we only had about two months of growth.”

The extra year also allowed the BrightView team to stabilize the soils on the berms where the corn was planted, add irrigation, regrade some site drainage areas, and grow a better stand of corn for this year. After putting the field to bed this past winter, the typical field maintenance plan kicked in around late March or early April of 2021.

“We had some great partners in the area with John Deere being up the road,” said Cook. “They brought us all the equipment and everything that we really needed to perform all of our maintenance requirements. It was like any other high-end sports field – we were ready for somebody to play on it. And they did. They came!”

“80 percent of the people who built the field are from Iowa – many of the contractors, much of the equipment, the lighting company, Musco. It was a tip of the hat to the state of Iowa, Dubuque, Dyersville, and the Iowa Chapter,” said Cook. “Our BrightView Sports Turf team that coordinated the build included Chad Olsen; Kevin Moses, CSFM; Isaiah Lienau, CSFM; Eric Ogden; and Tanner Dickherber, who are all from Iowa. We also brought in Iowa Sportsturf to lay our sod for us.”

Cook added that people from Iowa also worked on the agricultural side with the farmers to grow the corn (and define the cornrows) beyond the outfield fence.

Also on hand to help get the field ready for game day were STMA President, Nick McKenna, CSFM, who is originally from Iowa; Ryan Woodley of the Milwaukee Brewers, who is also from Iowa; and Will Schnell, former turf superintendent for the Rose Bowl, who is from the Midwest and previously worked with Cook.

“It’s something we’ve tried to do with many of our projects, going back to Fort Bragg,” said Cook. “We brought in quite a few of the local sports field managers from Minor League clubs to help with that project. It was in their state, and we felt it was important for them to be included and be a part of that special event. So we have carried that on to other projects we have managed, including Dyersville.

“All of it culminated to be pretty special,” Cook added. “It was the first MLB game to ever be played in Iowa, and the field was in the best condition it could be.”

Major League Baseball has already announced that another regular season MLB game will be played at the Field of Dreams in 2022 (this time featuring the Chicago Cubs and Cincinnati Reds). But long-term plans for the field – and its use and management – have yet to be determined.

Following this year’s game, the temporary stands and other back-of-house amenities were removed, and will be rebuilt for next year’s game.

“We are in a cornfield, and the baseball field will be all that is left when BaAM finishes breaking down the rest of the temporary structures,” said Cook. “There’s not even a backstop. There are no bathrooms, and the lights do not have a permanent power supply (they run on generators).”

According to Cook, for this year’s game, BaAM Productions (which also handles the NHL Winter Classic events) began building the entire 8,000-seat structure, all the locker rooms, and other back-of-house structures and amenities on July 1, and completed the build by August 8. So the management and setup for next year’s event will probably be much as it was for this year.

For now, however, Cook is just happy with the result of all the effort that went into making the Field of Dreams a reality.

“I’m just proud of the way the field turned out at the end,” he said. “It was really special, almost magical, from the game itself to the excitement of the fans that attended or watched it all over the world.”

The night before the game, Kevin Costner toured the field and took a moment to play catch with his son on the field. Afterward, Cook had the opportunity to meet Costner, who paid the field the ultimate compliment.

Said Cook, “Kevin pointed at the grass and said, ‘Is this real?’”

“It was a moment,” Cook added. “It’s perfect. For the industry, it just shines a spotlight on what we can do with natural grass, and the dreams it can make come true.”

For the full article with additional photos, timeline and other details, please see the cover story in the October issue of SportsField Management magazine. 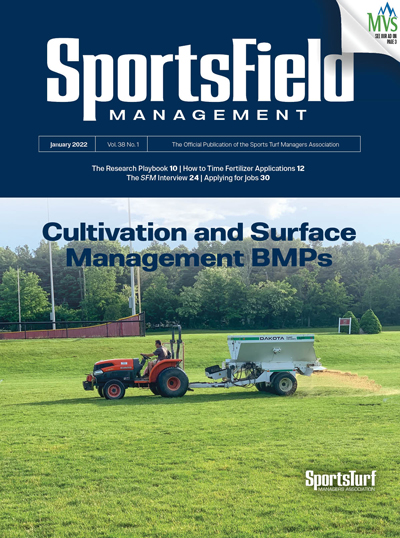